The Impact of Demographics on Real Estate Investing in Eastern Europe 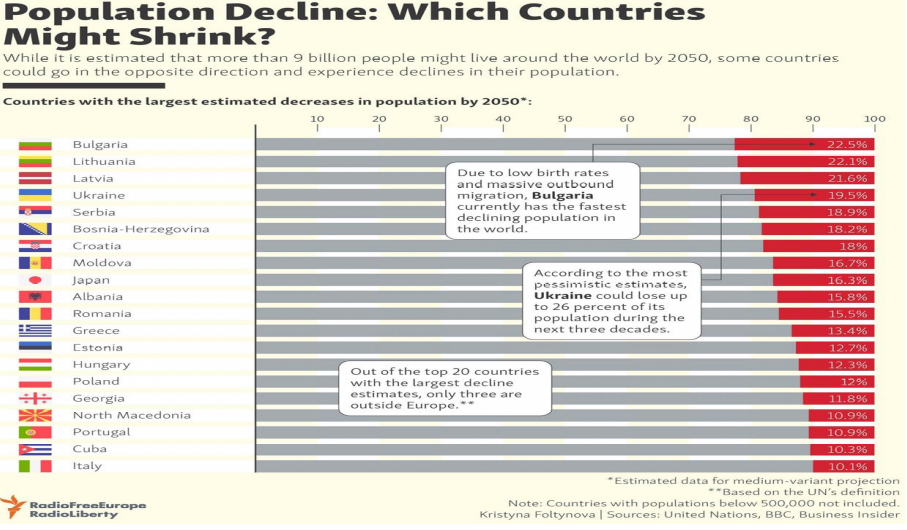 Real Estate has been booming in Central & Eastern Europe over the past few years. Investors who got in on cities like Budapest, Warsaw, Bucharest, Prague, Sofia have made very decent returns since 2014/2015. Prime Budapest properties can be had for less than 3500 euros per m2, with gross yields of 5%, compared to prime Vienna real estate for 7000 euros and yields of 2.5%. Gross rental income is the same, at half the price. However, demographics cast a dark cloud over the region.

Can the boom continue? This article is not about short to medium term speculation and price movements, but rather about a depressing trend that must be taken into account for long terms investments.

Eastern Europe is in the midst of a catastrophic population decline

Looking at countries like Bulgaria, Estonia, and Lithuania, the numbers are dramatic. Their populations are set to decrease by 20% by 2050, driven by their low fertility rates, low immigration, and high emigration. These numbers take the current trends of the following metrics into account:

Overall, the populations of these countries is indeed bound to gradually decline.

It simply means that the decline is just one of the forces that shall impact your real estate investment decision. Sure, GDP can continue growing and more people might want to invest – driving prices up. For now, poor demographics are not much of an issue if you are just speculating, but if you plan on buying a property to hold long term for your retirement, you must take it into account. Here are some ways to mitigate that factor:

Let me give you an example of what not to invest in. Nagykanizsa is a Hungarian town of about 50,000 souls, close to the Croatian border. It has some industry, a small university campus, and no tourism value. Yet with easy credit, one must pay around 1,500 euros per square meter to have an apartment close to the central square. Great location right? Can price go up further? Sure. But long term they are bound to fall. The city will lose population, the university might close down in the face of consolidation, and your property prices will be hit hard with no buyers around.

Declining demographics in Eastern Europe do not spell only doom & gloom for real estate. Instead, for these 1,500 euros per m2 you can buy 1 or 2 metro stops away from the core centers of Sofia, Kiev, and Bucharest. These are much safer and promising bets.

Likely scenario for Eastern Europe? The example of demographics in Japan and their impact on Real Estate

Japan has one of the lowest fertility rates worldwide at 1.4 per woman and is known for being the first “ageing” country. It a fore-bearer in the matter. Almost every prefecture outside of Tokyo has been decreasing in population.

Real estate prices peaked everywhere in Japan in 1989 and the bubble popped just as Japan started ageing. 30 years later prices are still not back to the previous peak in spite of massive money printing by the central bank, though they have recovered much better in Tokyo than in other cities. Core property has been doing better than non core, and within Tokyo itself as well.

Will the scenario be the same in Central & Eastern Europe?

Japan shows us the trend. Sure, you can speculate short or medium term on some second tier city real estate in Eastern Europe, but when the crisis hits you’ll be left holding an asset that will take a much longer time to recover as there will simply be less buyers around and more real estate to sell as people die and others start to realize the long term trend.

That said, Japanese demographics and real estate prices peaked when Japan was already rich and scope for growth had become structurally limited. Many of these Central & Eastern European countries still have substantial upside, and it would be a calculated risk to bet that the vast majority of that upside will be concentrated in the capital cities. The long term investor can still make money in real estate in Eastern Europe in the midst of declining demographics. He or she just needs to have a very targeted approach.